Miami PACT—People Acting for Community Together—is a large interfaith coalition known for its “Build people power for justice” mission. Founded in 1988, the countywide coalition is composed of representatives of 40 congregations.

So far this semester, the students have participated in an orientation and a “house meeting.” They will attend PACT’s annual meeting next Monday.

The 13 participating students expressed their shared concerns about several issues, including gun violence and the usually slow response and recovery after natural disasters.

Every year, PACT congregations conduct dozens of listening sessions and, based on the results of those sessions, vote to determine the community problems on which they will focus their work, the organization says at its website.

Next Monday (Oct. 25), students will attend PACT’s annual meeting to observe the closing out of the listening process. Member congregations will receive updates on the commitments made by elected officials and then vote on focus issues for the 2021–2022 cycle.

“This vote will signal to the Barry students what issues will inform their next service-learning activity: the production of testimonial video clips,” explained James, the experiential learning coordinator. “The SLCE module participants will identify and interview someone personally affected by one of the focus issues voted on for this year. The video clips will be shared with PACT and may be used as part of their strategic communication with elected officials.”

Teasha Fahie described the house meeting as “insightful.” She appreciated that “the meeting allowed all participants time to reflect on the traumas in life.”

Four Service-Learning And Civic Engagement Modules Being Implemented This Semester

The titles of the modules are “Food Security,” “People Power,” “Welcoming New Americans,” and “Youth in Action.” Each module requires at least 10 hours of community-focused engagement.

Details of each module are found in the GivePulse system:

The SLCE modules were developed by the Center for Community Service Initiatives (CCSI). For further information, contact the CCSI at service@barry.edu or qep@barry.edu.

Members of the Faculty Learning Community for Engaged Scholarship (FLC) will get together on campus next week to celebrate the publication of their book on experiential learning. The celebration will coincide with the Presidential Faculty Seminar Series.

President Dr. Mike Allen and Provost Dr. John Murray have been invited to the event, which will be hosted jointly by the Faculty Senate and the FLC.

Authors of “Experiential Learning in Higher Education” are expected to share information and highlight themes from their chapters.

FLC members are inviting their faculty colleagues to the seminar, which is scheduled for 12:20 to 1:30 on Thursday, October 28. They will meet in Weber Grand Hall.

The FLC is scheduled to meet virtually on November 18, from 12:20 to 1:30, and sometime in February. The November meeting will focus on “place-based community engagement,” the organizers said.

“Participants will learn how federal policies created structural inequalities in many areas, such as property ownership and education, and how these policies increase hunger and poverty in communities of color,” the organizers say.

They organizers added that participants will come to “understand the role of racial inequity in policies and why racial equity is so important to ending hunger and poverty in the United States.”

Bread for the World is “a collective Christian voice urging our nation’s decision makers to end hunger at home and abroad.” According to Bread, “By changing policies, programs, and conditions that allow hunger and poverty to persist,” the organization provides “help and opportunity at home and far beyond where we live.”

Registration for the Racial Wealth Gap Learning Simulation is required.

For additional information, contact Kaitlyn Gallagher program facilitator, in the CCSI at kgallagher@barry.edu. 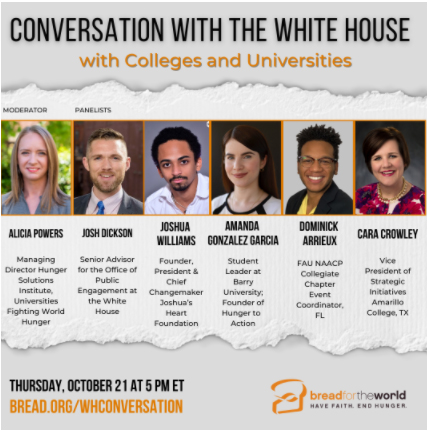 COMMUNITY ENGAGEMENT AWARDS: The CCSI is issuing an early call for nominations for the 2022 Community Engagement Awards.